Virginia County records vary widely from county to county both in quality and quantity. Some are already very carefully maintained while others have been much abused and uncared for.

Some Virginia records have merely disappeared. For genealogists undertaking research in Virginia there’s no valuable replace for an on-site research of county courthouse records. For Definitions of all court terms see the Genealogy Encyclopedia

Remember as you conduct your genealogy records research in the County and/or City, that when a new county was formed or incorporated, the records stayed in the parent and were not moved. Also many county and city records are still with the locality and not at the Library of Virginia. 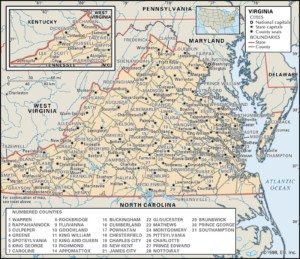 Most Virginia county records from before 1900 can be found on microfilm at the FHL and the Library of Virginia.

However, the sizes of both collections and the dates covered within those collections are different. The Library of Virginia’s website lists its holdings.

The city and county courthouses also hold many original records. Wars, fires and other problems have come up throughout Virginia’s history, which has caused many of the state’s records to be lost.

The majority of those records were lost during the destruction of courthouses and other buildings throughout the Civil War.

However, despite all of that, there are still many excellent genealogical resources to be found in the state.

Researchers must remember that the Virginia county boundary lines have changed many times throughout the years. Researchers must be mindful of that, as well as of migration patterns, in order to find the appropriate records.

The Library of Virginia’s website lists 16 sets of independent city records. City status in Virginia is determined by populations, which means that 25 Virginia towns did not become incorporated until 1904 and beyond.

Several counties in Virginia have actually become part of its independent cities and therefore no longer exist as counties. In some instances, those county and city records are still kept separately. See also a list of links to county and county seat government run websites.

Kentucky has counties that no longer exist because they were discontinued, renamed or merged with another county..

A lot of these counties were established and disbanded within the 19th century; county borders have modified very little since 1900 in the vast most of states.

These are important for genealogy research purposes. See the History of Virginia Counties.

The destruction to Virginia courthouses drastically has a effect on family historians in almost every way.

Not only are these types of historic buildings torn from all of our lifetimes, so are the archives they housed: marriage, wills, probate, land records, and others. Once destroyed they are lost forever.

Although, not all records were lost. Numerous Virginia counties have dealt with a loss of records due to courthouse fires, floods, and theft.

The Civil War caused devastating damage to multiple cities and their records. “Burned Record Counties” records can be difficult to find or replace using other resources.

Researchers interested in information on those counties may need to have added patience and spend more time looking into various different resource avenues.

Virginia is the only state with independent cities. Independent cities are politically and administratively separate from the county or counties in which they are geographically located.

Independent cities operate their own court system. As of 1987, there were 41 independent cities in Virginia; since population determines city status, more than half were incorporated after 1904.