Oklahoma County records vary widely from county to county in both quality and quantity. Some have been carefully preserved while others have been much abused and neglected. Some Oklahoma records have simply disappeared.

For genealogists doing research in Oklahoma there is no effective replace for an on-site search of county courthouse records. 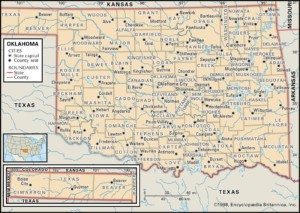 Oklahoma deeds, probates, and civil court records are located at the county clerk’s or clerk of the courts office.

Official certificates come from the State Department of Health.

The largest percentage of Oklahoma’s extant public records were generated in the twentieth century and are generally intact.

Send inquiries to the county official at the courthouse address for the appropriate county. See also a list of links to county and county seat government run websites.

Kentucky has counties that no longer exist because they were discontinued, renamed or merged with another counties.

See the History of Oklahoma Counties for more details.

Pennsylvania has no counties that are lost, defunct or extinct.

These are important for genealogy research purposes. See the History of Oklahoma Counties.