Maryland County records vary widely from county to county in both quality and quantity. Some have been carefully preserved while others have been much abused and neglected. Some Maryland records have simply disappeared.

For genealogists doing research in Maryland there is no effective replace for an on-site search of county courthouse records. 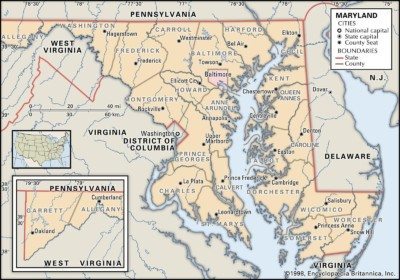 Maryland is made up of 23 counties and the City of Baltimore, which is not located in any specific county.

Records relating to estates and land transfers can be found in county courthouses. Copies can also be found at the Maryland State Archives, in most cases.

The Maryland State Archives also holds copies of vital records. Their files are constantly being added to and updated.

Maryland has counties that no longer exist because they were discontinued, renamed or merged with another county.

See the History of Maryland Counties for more details.