Minnesota Counties records differ vastly from county to county in either quality as well as quantity. Some happen to have been carefully preserved while others have been much neglected and mistreated. Some Minnesota records have simply disappeared. For genealogists carrying out research in Minnesota you will find no effective replace to have an on-site research of county court house records. For Definitions of all court terms see the Genealogy Encyclopedia

Minnesota Counties – There are 87 counties that exist in Minnesota. Each one holds records that may include: Land, Estates, Taxes, Vital Records, Divorces, Naturalizations, Voter Registration, Court Records. Other records may also be included. However, other resources do need to be consulted.

On October 27, 1849 nine counties were established. Among them were Benton, Dahkotah, Itasca, Ramsey, Mahkahta, Pembina, Wabasha, Washington, and Wahnata. Of these Benton, Dakota, Itasca, Ramsey, Wabasha, and Washington still exist as their original names. With the foundation of Kittson County on March 9, 1878, Pembina County no longer existed. When Minnesota was organized as a state, 57 of the present 87 counties were established. The last county to be created was Lake of the Woods County in 1923.

Minnesota is divided into 87 counties. There are several offices that are responsible for recording various types of county records for Minnesota’s counties. The county recorder is responsible for land records, while the court administrator’s office is responsible for vital records, including death, birth and marriage records. Probate files are found at the probate judge’s office and the court administrator’s office holds records from civil and criminal court cases. Note that death, birth and marriage records may not be entirely complete. Mortgage, deed and grantor-grantee indexes are also available, but the starting year doesn’t necessarily include all the information from that year. Wills and probate files are among the earliest probate records that were recorded. Early criminal files may have been filed as part of civil court files, instead. See also a list of links to county and county seat government run websites. 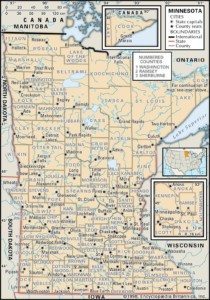 Minnesota contains counties that no longer exist. They were recognized by the state, provincial, or territorial governing administration. Many of these counties were established and disbanded in the 19th century; county boundaries have altered very little since 1900 in the vast most of states. These counties need to be looked at when you are performing family history and genealogy research. Pay close attention where the courthouse records went to if the county was eliminated or merged with a different county.

The destruction to Minnesota courthouses tremendously has a affect on genealogists in just about every way. Not only are these types of historic structures torn from our lifetimes, so are the files they kept: marriage, wills, probate, land records, as well as others. Once destroyed they’re gone permanently. Despite the fact that they have been put on mircofilm, computers and film burn as well. The most sad aspect of this is the reason why virtually all of our courthouses are destroyed from arsonist. However, you cannot assume all records were destroyed. A number of Minnesota counties have dealt with a loss of records due to courthouse fires, floods, and theft.