Texas County records vary widely from county to county in both quality and quantity. Some have been carefully preserved while others have been much abused and neglected. Some Texas records have simply disappeared.

For genealogists doing research in Texas there is no effective replace for an on-site search of county courthouse records. 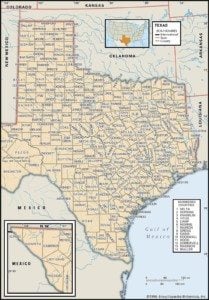 The Texas legislature created a uniform statewide record preservation system in 1972. That led to historical depositories across the state receiving copies of important Texas records. The act led to the Local Records Division of the Texas State Library collecting and maintaining local government records, including city and county records. All of those records are available to researchers.

Each county has a designated repository for county records. Those records include probate, property, and naturalization records, as well as marriage records, wills, and district court minutes. Since each county keeps its own records, there is no complete collection of those records available at the state level.

There are 26 depositories across the state. They all contain some manuscripts and original records. Many county records have been microfilmed, but some have not. Out of 254 county courthouses, approximately 80 have had inventories of their records done. It is also worth noting that thefts, fires, and floods have destroyed many courthouse records in Texas. So, availability dates may vary.

There were 27 more counties formed by the legislature at later dates. Also, certain counties were organized and then organized again later, often due to boundary changes. The 27 additional counties, which included Foley, Buchel, and Encinal, were never officially organized. Only records for those three exist. Later, Buchel and Foley counties were merged into Brewster County. Encinal county was absorbed by Webb County. The county clerk holds deeds, while probate records may be found at the probate clerk’s office or the county clerk’s office, depending on the size of the county. County or district court clerk offices hold court records.

Some counties were organized twice. Although twenty-seven additional counties were created by the legislature, none were organized. Of these only Buchel, Encinal, and Foley counties had records. Buchel and Foley were incorporated into Brewster County, while Encinal was included in Webb County. Deeds are located through the county clerk, probates at the county clerk’s or the probate clerk’s office in larger counties, and court records through the county or district court clerk. Letters should be addressed to the appropriate clerk. So, researchers must address inquiries to the appropriate offices. See also a list of links to county and county seat government run websites.

Texas has counties that no longer exist because they were discontinued, renamed or merged with another county.

See the History of Texas Counties for more details.