Ohio County records vary widely from county to county in both quality and quantity. Some have been carefully preserved while others have been much abused and neglected. Some Ohio records have simply disappeared.

For genealogists doing research in Ohio there is no effective replace for an on-site search of county courthouse records. 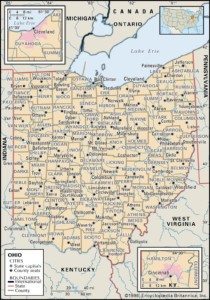 Since 1908, event have been recorded at the county’s health department and also with the Vital Records Office in Columbus.

If you are looking for a marriage record before 1949, consult the probate court office of the county where the marriage took place.

All deeds from a county, regardless of the year, are held in the county recorders office.

If you are making a request by mail, use the name of the county and “County Courthouse,” and below that list the address.

Listed addresses are usually the location of the county government building. Sometimes records are located at a different address.

Kentucky has counties that no longer exist because they were discontinued, renamed or merged with another county.

See the History of Ohio Counties for more details.

Researchers should note that some records may have survived in each case. So, it is important to contact the county courthouses first and see which records are still available. Courthouse record keepers may also be able to point researchers to other resources.