Virginia has played a large role in United States history, especially in colonial times. In 1607 Jamestown was founded. It was the first permanent settlement established by English settlers. In 1619, the practice of slavery began in the area.

Virginia was also home to both the Revolutionary War surrender at Yorktown and the Civil War surrender at Appomattox. Eight of the Presidents of the United States have been born in Virginia, which is why the state is known as the “Mother of Presidents.”

Virginia Counties – The Virginia Colony existed from 1607 to 1776. Established on June 25, 1788 the State of Virginia entered the union as the 10th state. Virginia borders Kentucky, Maryland, North Carolina, Tennessee, West Virginia and Washington, District of Columbia. It  95 Counties and 39 independent cities. The Virginia State Capital is in Richmond and the state government website is va.gov. 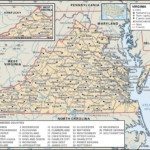