New Jersey County records vary widely from county to county in both quality and quantity. Some have been carefully preserved while others have been much abused and neglected. Some New Jersey records have simply disappeared.

For genealogists doing research in New Jersey there is no effective replace for an on-site search of county courthouse records. 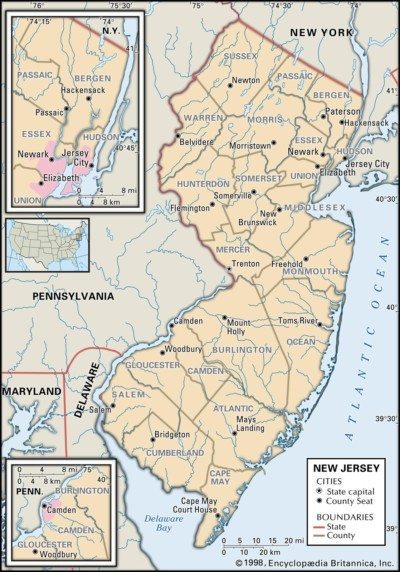 There are 21 counties in the state of New Jersey. Each one has its own records relating to court cases, estates, land transfers, and other important events.

Each county is governed by a Board of Freeholders, whose records should not be overlooked.

Other useful county records may be located in the courthouses or at the New Jersey State Archives, including Justice of the Peace Dockets; tavern, peddler’s, and shopkeeper’s licenses; road books; and slave births and manumissions.

The New Jersey State Archives and individual courthouses may also hold useful information. That information could include, but is not limited to

Certain counties have their own county archives or county record centers. Older records are transferred to those locations for research and preservation purposes.

The counties that currently have those sorts of facilities are Bergen, Cape May, Hudson, Middlesex, Monmouth, Morris, Ocean, Salem, Somerset and Sussex.

However, researchers should still contact county clerks, first, since many of them have retained original records.

The state archives holds some select ancient town books, but many records are still held by the cities, townships, and boroughs.

Those records may include listings of elected officials and indigents, as well as notices of stray animals and other information.

A state legislative act in 1979 created a system of local historians. It is the job of those historians to “promote and preserve the history of the municipalities.”

However, their coverage is not universal across the state. The New Jersey Historical Commission‘s website provides a list of those historians.

Most municipal records are still in the townships, boroughs, and cities, but some are at the state archives and the New Jersey Historical Society. These list earmarks (although some are also found in county records), indigents, elected officials, stray animals, and so forth.

New Jersey has counties that no longer exist because they were discontinued, renamed or merged with another county.

See the History of New Jersey Counties for more details.