Connecticut County records vary widely from county to county in both quality and quantity. Some have been carefully preserved while others have been much abused and neglected. Some Connecticut records have simply disappeared.

For genealogists doing research in Connecticut there is no effective replace for an on-site search of county courthouse records. 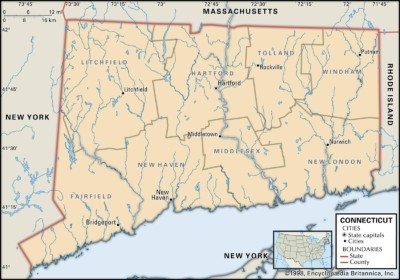 There are 8 counties that exist in Connecticut. Four of them were created in 1666, during the first consolidation of the colony of Connecticut from a number of smaller colonies.

Other records may also be included. However, other resources do need to be consulted.

Counties were mainly developed as a way to denote county court districts. In 1959, all counties were dissolved. Federal census returns prior to that year were organized according to county.

When the 1790 federal census was taken, there were eight counties in Connecticut. Certain towns were located close to county borders and were recorded as part of different county censuses.

County government was abolished in Connecticut in 1960, although the names remain for geographical purposes. Counties are, however, still used by the state to organize its judicial and state marshal system.

Connecticut has counties that no longer exist because they were discontinued, renamed or merged with another county.

See the History of Connecticut Counties for more details.