Rhode Island County records vary widely from county to county in both quality and quantity. Some have been carefully preserved while others have been much abused and neglected. Some Rhode Island records have simply disappeared.

For genealogists doing research in Rhode Island there is no effective replace for an on-site search of county courthouse records. 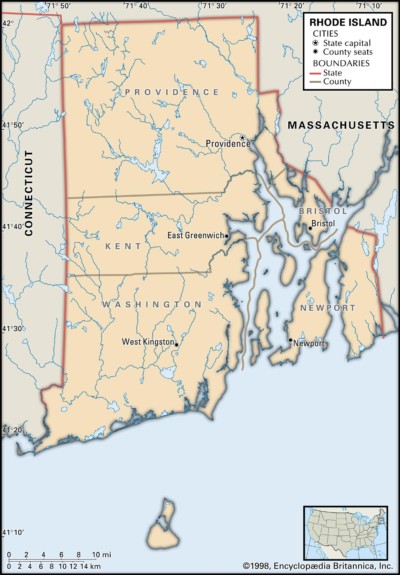 From a genealogical standpoint, most of the valuable information that can be gained from Rhode Island’s county records involves either federal censuses or court records.

County courts didn’t exist in the state prior to 1729. Although, two counties, Newport and Providence, came into existence in 1703.

Each of today’s Rhode Island counties was in existence by 1750. Bristol County was formed in 1746 or 1747 because the state of Massachusetts ceded five towns to Rhode Island.

Most original records only exist on a town by town basis, but several of them have been compiled and published in groups according to county, probably because of the county structures in other states.

The superior court county seat holds most modern court records, while earlier records have been relocated to various sources, such as archives and historical societies.

Rhode Island has counties that no longer exist because they were discontinued, renamed or merged with another county.

See the History of Rhode Island Counties for more details.