Nevada County records vary widely from county to county in both quality and quantity. Some have been carefully preserved while others have been much abused and neglected. Some Nevada records have simply disappeared.

For genealogists doing research in Nevada there is no effective replace for an on-site search of county courthouse records. 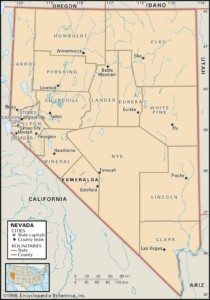 Nevada is divided into 16 counties. Nevada was admitted to the Union on October 31, 1864 with eleven counties. In 1969, Ormsby County and Carson City were consolidated into a single municipal government known as Carson City.

Carson City, the state capital, is also an independent city, which doesn’t belong to any county. However, it has a similar status to that of the 16 counties in the state. Carson City used to be the county seat of Ormsby County, but the two were consolidated in 1969.

Each of the 16 counties in Nevada has a sheriff, board of commissioners, district attorney, public administrator, and other various officials with specific jobs to do.

Each town and city in Nevada was granted a charter from the state legislature, and many of the cities and towns operate using a governmental system including town council members and a mayor.

Each county may have its own records on file. However, many county records can be found on microfilm at the FHL and at the Nevada State Library and Archives.

County recorders are responsible for most county land records. However, two counties have their land records at the county assessor’s office.

The Nevada State Library and Archives has a list of which county offices hold which types of records. See also a list of links to county and county seat government run websites.

Nevada has counties that no longer exist because they were discontinued, renamed or merged with another county.

See the History of Nevada Counties for more details.