South Carolina County records vary widely from county to county in both quality and quantity. Some have been carefully preserved while others have been much abused and neglected. Some South Carolina records have simply disappeared.

For genealogists doing research in South Carolina there is no effective replace for an on-site search of county courthouse records. 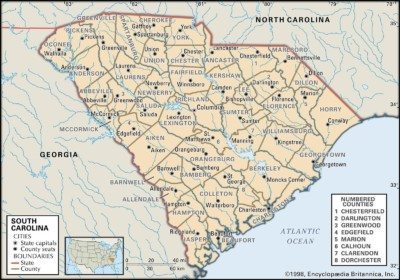 In the colonial period, the land around the coast was divided into parishes corresponding to the parishes of the Church of England. There were also several counties that had judicial and electoral functions.

As people settled the backcountry, judicial districts and additional counties were formed. This structure continued and grew after the Revolutionary War.

In 1800, all counties were renamed as districts. In 1868, the districts were converted back to counties.

Generally, county officers in South Carolina didn’t have much power. The state legislature more or less governed each county.

However, the Home Rule Act of 1975 changed that system. There are four possible types of government that can be used in each county, since that act was passed.

Successful research in South Carolina requires an understanding of the unique and complex development of its local government and jurisdictions. Unlike the other twelve British colonies, South Carolina did not form counties or towns during the colonial period.

It is vital that researchers have a complete understanding of South Carolina judicial developments, since they are quite unique.

For example, South Carolina is the only one of the original 13 colonies that did not have towns and counties in colonial times.

South Carolina has counties that no longer exist because they were discontinued, renamed or merged with another county.

See the History of South Carolina Counties for more details.

Counties were established in the colonial period primarily for locating land grants, with most other governmental activities being centralized in Charleston.

The growth of the backcountry led to the establishment of judicial districts throughout the colony, but low country areas continued to be identified primarily by their Anglican parish names.

Following the Revolution, both district and county courts were established, but in 1800 most of the counties became districts.

Finally, in 1868 all of the existing districts were renamed counties. New counties continued to be formed until the early part of the 20th century, with the most recent being Allendale in 1919.

See the History of South Carolina Counties for more details.