Utah County records vary widely from county to county in both quality and quantity. Some have been carefully preserved while others have been much abused and neglected. Some Utah records have simply disappeared.

For genealogists doing research in Utah there is no effective replace for an on-site search of county courthouse records. 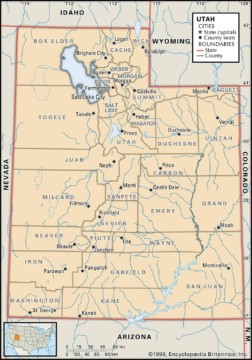 There were originally 7 counties established under the provisional State of Deseret in 1849: Davis, Iron, Sanpete, Salt Lake, Tooele, Utah, and Weber. The Territory of Utah was created in 1851 with the first territorial legislature meeting from 1851–1852.

The first legislature re-created the original counties from the State of Deseret under territorial law as well as establishing 3 additional counties: Juab, Millard, and Washington.

All other counties were established between 1854 and 1894 by the Utah Territorial Legislature under territorial law except for the last 2 counties formed, Daggett and Duchesne. They were created by popular vote and by gubernatorial proclamation after Utah became a state.

Utah is divided into 29 counties.

Utah has counties that no longer exist because they were discontinued, renamed or merged with another county.

See the History of Utah Counties for more details.

There have been no reported damage to Utah courthouses or major record loses.