North Carolina County records vary widely from county to county in both quality and quantity. Some have been carefully preserved while others have been much abused and neglected. Some North Carolina records have simply disappeared.

For genealogists doing research in North Carolina there is no effective replace for an on-site search of county courthouse records. 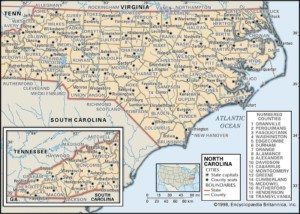 Other information, such as will and deed books, may be found at the county seats.

Many county clerks recorded documents and records from their parent counties when the new counties were formed. Sometimes all records were simply transferred.

So, some counties may have records on file that are older than the counties themselves. The county seat is home to the register of deeds, which keeps vital records for the county.

Other court records may also be available there, but many have been transferred to the North Carolina State Archives.

Not all records are still extant. Some have been destroyed in fires and other circumstances over the years. See also a list of links to county and county seat government run websites.

North Carolina has counties that no longer exist because they were discontinued, renamed or merged with another county.

See the History of North Carolina Counties for more details.

However, not all records were damaged or lost in some counties.
The first item is the county name, followed by the date of courthouse destruction, () describes what caused the destruction and if records were destroyed.