New Hampshire County records vary widely from county to county in both quality and quantity. Some have been carefully preserved while others have been much abused and neglected. Some New Hampshire records have simply disappeared.

For genealogists doing research in New Hampshire there is no effective replace for an on-site search of county courthouse records. 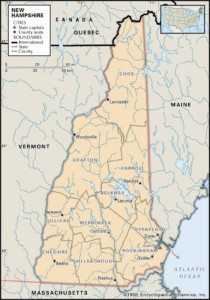 Each county records probate records and deeds. However, it is important to note the probates and deeds were recorded on the province level until 1771, even though an act was passed in 1769 requiring such recordings to be done by the counties.

Those functions were even later in Strafford County, which began recording probates and deeds in 1773.

The archives also holds the deeds for Rockingham County from 1824 and earlier years.

Deed records on file go from county inception to about 1850 at both the New England Historic Genealogical Society and the FHL.

For the most part, records from after 1850 can only be found in county offices. See also a list of links to county and county seat government run websites.

The New Hampshire State Library has the WPA index on file. The FHL and the New England Historic Genealogical Society also have microfilmed copies of it.

That index includes records from 1850 and previous years for New Hampshire towns. Among those records are vital records.

However, the town of Exeter was not listed in the index, as it was somehow overlooked accidentally.

The following information can usually be found in the files of the town clerk for each town:

Each town’s records are different, but they all contain useful information, which the researcher should not overlook.

Generally, the researcher will have to do the actual research themselves, but the town clerks are willing to outline what information can be found in their offices.

The researcher will need to figure out which probate and deed records are still extant for that town. So, it will be necessary to figure out the date that the town was formed, the county it is located in, and what its parent counties were.

Only then can the appropriate original records be located. Both probate and deed records from before 1771 are all housed at the New Hampshire Records and Archives.

It is important to search those provincial records, in order to trace all records for a particular person or piece of property.

There are also other records that can be helpful to genealogical researchers in the state of New Hampshire.

New Hampshire has counties that no longer exist because they were discontinued, renamed or merged with another county.

See the History of New Hampshire Counties for more details.