New York Counties records can vary vastly from county to county in both quality and also quantity. Some have already been carefully maintained while others have been substantially misused and uncared for. A number of New York records have merely vanished. For genealogists performing research in New York there’s no effective substitute to have an on-site research of county court house records. For Definitions of all court terms see the Genealogy Encyclopedia

New York Counties – There are 62 counties that exist in New York. Each one holds records that may include: Land, Estates, Taxes, Vital Records, Divorces, Naturalizations, Voter Registration, Court Records.

The original twelve counties were created immediately after the British takeover of the Dutch colony of New Amsterdam, although two of these counties have since been abolished. Some New York counties have set up record centers or archives such as are found in Broome, Cayuga, Montgomery, Ontario, Washington, Westchester, and other counties. While most initial inquiries about records should be made with the county clerk and county surrogate’s clerk, the information sought might actually now be housed in a county records center/archives. This practice will doubtless continue in New York, especially for older records.

All county pages in New York listed below contain the name of the county and the mailing address of the county clerk, who is in charge of deeds, mortgages, marriages (1908–35), divorces, court records, state censuses, and other records is listed, the year the county was created, where applicable, the parent county or counties from which it was formed, the date the earliest deed was recorded is also listed. County deeds and mortgages not found with the county clerk are also indicated here. The date of the earliest county surrogate court record, followed by the mailing address of the county surrogate’s clerk, if not the same as that of the county clerk. Some counties have copies or abstracts of earlier deeds and wills from parent counties.

It should be kept in mind that the names of the parent county or counties are those from which the new county was first formed in the year indicated. Many changes took place later, at which times whole towns or parts of them were annexed to or from the newer county. For example, Yates County was created in 1823 from part of Ontario County; the following year two towns were added to Yates from Steuben County. For the specifics of other changes, consult gazetteers, county directories, and county histories. See also a list of links to county and county seat government run websites. 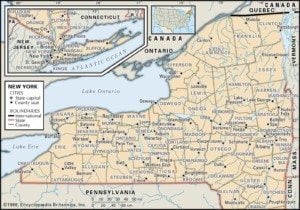 New York contains counties that no longer are in existence. They were set up by the state, provincial, or territorial governing administration. Many of these counties were established and disbanded in the Nineteenth century; county borders have evolved little since 1900 in the vast majority of states. These counties need to be looked at when you are conducting genealogy and family history research. Pay attention where the courthouse records went to if the county was eliminated or combined with another county.

The harm to New York courthouses tremendously has a effect on genealogists in every way. Not only are these types of historic structures torn from all of our lifetimes, so are the records they kept: marriage, wills, probate, land records, as well as others. Once destroyed they’re lost permanently. Even though they have been placed on mircofilm, computers and film burn too. The most sad aspect of this is the reason why virtually all of our courthouses are destroyed as a result of arsonist. However, don’t assume all records were destroyed. Numerous New York counties have suffered a loss of records due to courthouse fires, floods, and theft.