Louisiana Parish records vary widely from county to county in both quality and quantity. Some have been carefully preserved while others have been much abused and neglected. Some Louisiana records have simply disappeared.

For genealogists doing research in Louisiana there is no effective replace for an on-site search of parish courthouse records. 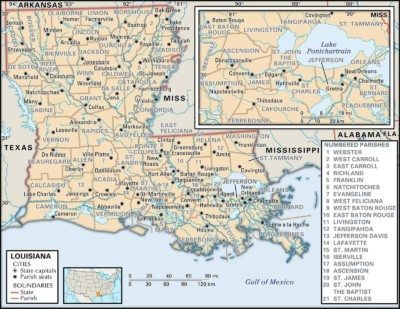 Parish clerks hold the majority of these records, while some cities have these functions divided among register of conveyances and district court clerks.

The Louisiana Section of the State Library of Louisiana provided some of the information on parish formation.

Court records, marriage records, and other documents are recorded according to parish, not county, in Louisiana.

Probate and land records are also recorded that way. Parish clerks should be consulted for information concerning those records.

However, district court clerks and registers of conveyances also exist in some parishes. Their records should be consulted as well.

The FHL has many records on file for Louisiana. Those records were compiled by the Genealogical Society of Utah and may include the following record types: Court, Property, Notarial, Probate, Tax, Vital.

Information on the formation of parishes can be found at the State Library of Louisiana. The Parish Clerks of Court and State Office of Vital Records can provide copies of birth certificates.

However, access may be restricted unless relationship to the person of interest can be proven. See also a list of links to parish and parish seat government run websites.

Louisiana has parishes that no longer exist because they were discontinued, renamed or merged with another parish.

A lot of these counties were established and disbanded within the 19th century; parish borders have changed very little since 1900.

These are important for genealogy research purposes. Pay attention where the courthouse records went to if the parish was eliminated or joined with some other parish.

See the History of Louisiana Counties for more details.