A Map of Bergen County, New Jersey contains detailed information about roads and boundaries, these maps may include rural communities, churches, and cemeteries. 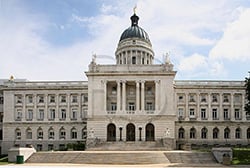 The following dates indicates what vital, land, probate, and court records are in Bergen county. The date listed for each record is usually the earliest registration filed. The date does not indicate that there are alot records for that year and does not mean that all such events were actually filed with the clerk.

Earlier records of the county clerk are in the archives, Cultural and Historic Affairs, 1 Bergen County Plaza, Room 425. These include deeds, 1707 - 1828 (Libers A - Z2), chattel mortgages, soldier burials, justices and freeholders records, voter registrations, slave births and manumissions, and early court records, as well as microfilm of archival court and other records, the originals of which are now at the state archives.