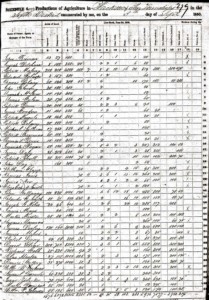 During the censuses of 1850, 1860, and 1870, certain agricultural information was collected from each farm:

The 1880-1910 schedules expanded the information collected to include how much acreage is assigned to each crop, poultry owned, and eggs produced.

One insight that can be gained in family history research is the existence of “sideline businesses” operated by a farm that would not be included in the agricultural schedule.  Examples of sideline businesses include tanning, milling, coopering, or cheese making.

Researchers should consult both Agricultural and Manufacturers Schedules to identify family industries.

Agriculture censuses can be used in the following ways:

Agricultural schedules did not include every farm in the United States.  Farms producing less than $100 worth of products annually were excluded in 1850.

Additional agricultural operations were excluded in 1870, when farms owning less than three acres or producing less than $500 worth of products were eliminated from the schedule.

Where to Find Agricultural Schedules

Agriculture schedules are scattered among a variety of archives in which they were deposited by the National Archives and Records Service.

Most are not indexed, and only a few had been microfilmed until recently, when the National Archives asked that copies be returned for historical research.