Slaves were usually not named, but were enumerated separately and usually only numbered under the slave owner’s name. The National Archives has microfilmed all of the original manuscripts for applicable states. 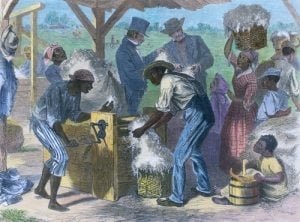 In most cases, individuals were not named but were simply numbered and can be distinguished only by age, sex, and color. The names of owners are recorded.

However, some enumerators listed the given names of slaves, particularly those over one hundred years of age.

These names are generally found in the “name of slave owners” column.

Questions Asked in the 1850 Slave Census

Other questions asked include

The slave schedule is especially useful for researchers who are seeking information about their slave holding ancestors.

This is because of the specific information it provides about their holdings and other information you can draw from it.

For example, the number of slaves enumerated under an owner could help you determine if he had a plantation and its size.

Sometimes the listings for large slave holdings appear to take the form of family groupings. However, in most cases slaves are listed from eldest to youngest with no apparent effort to portray family structure.

The slave schedules themselves almost never provide conclusive evidence for the presence of a specific slave in the household or plantation of a particular slaveholder.

At best, a census slave schedule can provide supporting evidence for a hypothesis derived from other sources.

The official enumeration day of the 1850 slave census was 1 June 1850. All questions asked were supposed to refer to that date. 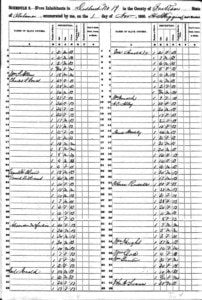 By 1850, there were a total of thirty-one states in the Union, with Florida, Texas, Iowa, Wisconsin, and California being the latest editions. There were no substantial state  or district-wide losses. 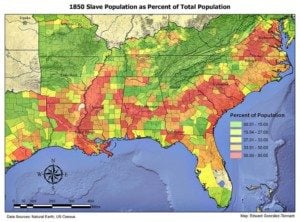 Slave schedules are not available for other states. 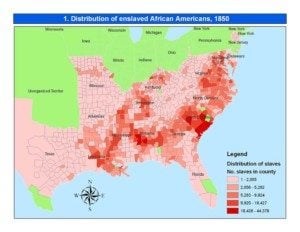 Distribution of Slaves in 1850 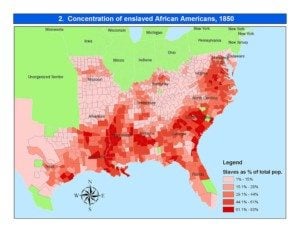 Concentration of Slaves in 1850

The official enumeration day of the 1860 slave census was 1 June 1860. All questions asked were supposed to refer to that date. 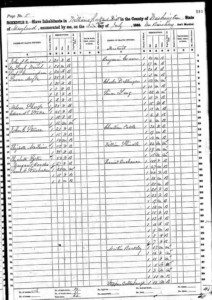 By 1860, there were a total of thirty-three states in the Union, with Minnesota and Oregon being the latest editions.

There were no substantial state  or district-wide losses. 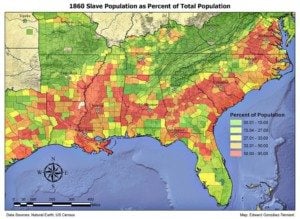 at Ancestry.com consists of all individuals enumerated in the 1860 Slave Census, the Twelfth Census of the United States.

Additionally, the names of those listed on the Slave population schedule are linked to actual images of the 1860 Federal Census, copied from the National Archives and Records Administration.