The Federal Mortality Census Schedule records was taken in 1850, 1860, 1870, 1880, and 1885 (applicable state censuses). The census included questions about persons who had died in the year immediately preceding the census.

Because death records were not required until the late 1800’s, a mortality schedule can be the only death record available.

These schedules may be the only record of death for some individuals, as many states did not require recording of deaths until the late nineteenth century.

In addition, gravestones or cemetery records may be nonexistent. It may also be the only record of existence for children who have no gravestone.

By using these schedules to document death dates and family members, it is possible to follow up with focused searches in obituaries, mortuary records, cemeteries, and probate records.

Mortality schedules are useful for tracing and documenting genetic symptoms and diseases, filling in the gaps of important family medical history. This information can be helpful to family members today.

The Federal Mortality Schedules can also be used to find information about ancestors who were not normally included in the census.

For example, they can be used to verify and document African American, Chinese, and Native American ancestry.

Unfortunately,  African Americans are often not included, especially if they were slaves. 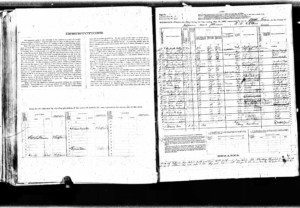 Mortality schedules asked for the following information about the deceased:

In 1870, parents’ birthplaces were added. In 1880, the place where a disease was contracted and how long the deceased person was a citizen or resident of the area were included (fractions mean months when less than one year).

You may find the following resources helpful in your research of the 1850 to 1885 U.S. Mortality Census data.

at Ancestry.com contains an index to individuals enumerated in these mortality schedules. In addition, each individual is linked to the census image on which they appear.

Not all information that is recorded on the actual census is included in the index. Therefore, it is important that you view the image on which your ancestor is recorded to obtain all possible information about him/her.

This database often included the names of the slave owners whose slaves had passed – please search in the ‘Other’ field to locate slave owners.

The federal act of 1879 that regulated the 1880 census also requested states and territories to conduct semi-decennial state censuses offering monetary compensation to those who did.

Fifty percent of the amount states and territories paid supervisors and enumerators would be remunerated to the state or territory from the Federal Treasury on completion of the census. These records were later transferred from state archives to the National Archives.