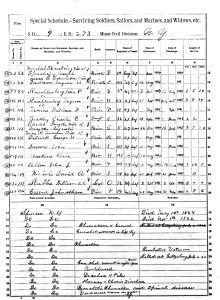 All of these items were included in the general census schedule.  However, a separate veterans index was also that listed the veteran’s name, rank, year of enlistment, and year of discharge.

A fire in the Commerce Department in 1921 destroyed the majority of the general census schedule.  The alphabetical list of states from Alabama through half of Kentucky also lost the veterans schedule for this census.

However, the veterans schedules for the remaining 34 states, the District of Columbia, and parts of Kentucky survived.

Using the 1890 Veterans Schedule as a Census Substitute

Because many states lost their general census schedules, the surviving veterans schedules are often used as a substitute for genealogical research.

These special indexes act as partial list of heads of households for the older family members who served in the Civil War.

Other Uses of the 1890 Veterans Schedule

The veterans schedules can be used to find other valuable family information, like finding the places of origin of family members who served in the Civil War.

The records also can be used to verify service records and identify in which unit and ancestor served.

Genealogists looking for Revolutionary War veterans should research records of the 1840 census.

In 1840, Revolutionary War Pensioners and their ages were listed on the back of the population schedules.