Fate of the 1890 Population Census

Different parts of the missing 1890 census burned in not one, but two fires. After the second and more devastating fire, the surviving waterlogged records were left neglected, then quietly destroyed years later by government administrators. 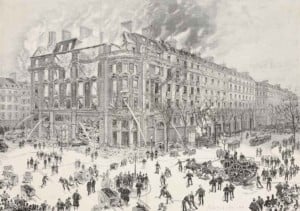 On Sunday, March 22, 1896, at 2:00 am, fire breaks out in the basement of Marinis Hall. This is the home of the United States Census Office, and where many schedules from the 1890 Census are being housed.

The fire starts in the back of the building, reaching the second and third floors, and billowing thick smoke. The smoke causes some delays in extinguishing the blaze.

Within 30 minutes of the fire report, the flames are extinguished. The firefighters are, however, vexed to find that the fire reignited in the same building by 6am, at which time they are called out again to extinguish the flare-up.

Many documents are lost. However, officials say that most of the papers destroyed in the fire, matter very little and will not be missed.

The 1890 special schedules documenting crime, pauperism, mortality, and impairments have been damaged, and are permanently destroyed by Congressional order. The 1890 general population census are not damaged.

The census files, including from 1890, are relocated to the new Census Bureau headquarters, at the Department of Commerce Building on G Street in Washington DC.

The unbound census files are sent to the basement of the Commerce Building, partially to reside in a new fire-resistant and allegedly waterproof vault.

Fire at the Commerce Building

Late in the afternoon of January 19, 1921, Commerce Building watchmen reported smoke emerging from pipes. This is the building where complete census records from 1790 through present, reside on shelves in a basement vault that is supposed to be waterproof and fireproof. But the 1890 census is stacked just outside of the vault on pine shelves. 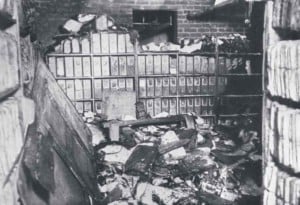 When the fire department arrived a 30 minutes later, they first evacuated employees from the top floors. By that time, intensifying smoke blocked access to the basement. The firefighters chop and drill through floors in order to reach the root of the fire.

The records in the vault, which are supposed to be safe, is exposed by a broken window in the vault’s door, and a floor that is not waterproof. The drilling and chopping performed by the firefighters only further compromises the integrity of basement storage.

Thousands of bystanders watched fire crews punch holes in the concrete floors and pour streams of water into the basement. Firemen continued the deluge for 45 minutes after the fire had gone out.

A clerk opens one or more windows to allow the smoke to diffuse into the night air, but the damaged census books that hadn’t burned sat in sooty puddles on charred shelves. The damaged 1890 Census remain untouched overnight.

Remains of the 1890 Census are Relocated

When officials finally tallied the damage, they found about a quarter of of the 1890 census records are totally and utterly destroyed. Another 40% to 50% had some smoke and water damage, with ink running and pages sticking together. The remaining volumes, as much as approximately 37% of the collection, is completely unharmed.

However, anxious census officials had to wait several days for insurance inspectors to do their jobs before they could access the scene of the fire. It is the end of January before the damaged items are removed to another location.

The Census Bureau estimated it would take two to three years to copy and save the damaged records, but it never got the chance. The moldering books were moved to temporary storage.

Remains of the 1890 Census are Returned to the Commerce Building

The Census Bureau told congress that the 1890 census records are rotting, untouched and unorganized in a nearby warehouse, and that if they remain there then Congress might as well destroy them rather than paying rent for them to slowly rot away. Congress is shocked to learn from the Census Bureau that there are no other copies of the census.

Several groups launch campaigns to prevent the tragedy, including the Daughters of the American Revolution, genealogical groups, and many prominent figures. The Census Bureau reacts with reassurances that the rumors are unfounded and with suggestions that a National Archive is the key to preventing such disasters in the future.

In May of 1921 the Census Bureau ordered the transfer the 1890 Census back to the Commerce Building for sorting and accessible storage. This move suggests that much, or at least some, of the 1890 census was salvageable, even legible and usable, if restoration efforts are applied.

But after they came back to the census office, but the subject of restoring them didn’t come up again.

Ordered Destruction of the 1890 Census

Twelve years after the fire at the Commerce Building, the Department of Commerce has completed construction on a new headquarters in Washington DC.

In December of 1932, the Census Bureau sends the Congressional Librarian a list of documents and papers that are longer needed and scheduled to be destroyed. This was a routine matter according to the disposal procedure that was put in place to prevent unnecessary paper kindling posing a fire hazard.

On this list was “Schedules, Population… 1890, original”. It is the duty of the Librarian to review the list and weed out any historically important items that require preservation and protection.

Why was the 1890 census ever on the list, and why did the Librarian not flag it for preservation? Once again, genealogical and historical groups are understandably upset.

Congress approved this the day before the cornerstone was laid for the new National Archives building, and by 1934, the 1890 Census is said to be completely and intentionally destroyed by the U.S. Government.

The following are surviving population schedules: