Mississippi became the 20th state in 1817. The first federal census after that point was taken in 1820. There are three printed variations of those census records, but none include slave information.

1830 records for Pike County are missing, but tax records were used to supplement the Gillis index for that time. There are transcriptions of those records, but the originals should be consulted for accuracy. Researchers should also note that the ages and names of pensioners are listed in the 1840 census records. 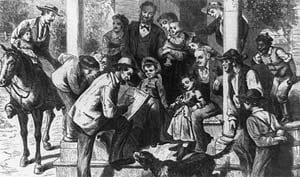 The 1860 census records for Washington, Hancock, and Sunflower counties are missing.

From the 1870 census onward, Native Americans, Chinese, and African Americans were listed in census records, along with their citizenship status.

The 1890 census records have been lost, except for the Mississippi Union veterans lists.

The Mississippi Department of Archives and History holds the original state census copies for 1850 to 1880. It also holds copies of all of the federal census records.

Those records are located in “The Cuban Papers,” or “Papeles Procedentes de Cuba.” Those records can be found in Seville, Spain at the General Archives of the Indies.

The Mississippi Territory legislature had census reports taken several times between the years of 1798 and 1817. The Mississippi Department of Archives and History holds those records.

The “Armstrong Roll of 1831″ was a special census taken after the “Treaty of Dancing Rabbit Creek” was agreed upon. It was a Choctaw treaty, and it was the last major exchange of land between the Europeans and the Native Americans. The census record lists members of the Choctaw tribe, as well as slaves and white settlers who married Choctaws.

The “Educable Children Records” was a record taken of each county’s school-aged children. Most of those records can still be found in the superintendent of education’s office in each county.

However, some of them are on file at the Mississippi Department of Archives and History. The records at the archives are not indexed. They are arranged according to county.

Mississippi census records that are missing include the following: