The first European explorers of what is now the State of Ohio were the French in 1667. Led by Sier de la Salle, Rober Cavalier, the French were primarily interested in fur trade and did not settle in the region. The British, however, desired to colonize the Ohio Valley, and established the Ohio company of Virginia in 1749 for that purpose. This eventually led to conflict over the territory in the French and Indian Wars. After the French and Indian wars, the area became property of Britain in 1763. However, this was not the end of conflict. The region was the site of ongoing fighting with Native Americans throughout the 1790s, including a 1794 battle at Fallen Timbers that led to a victory by Maj. Gen. Anthony Wayne. When Britain conceded all territory at the conclusion of the Revolutionary War, Ohio became the property of the United States of America as part of the Northwest Territory. Marietta, the territory’s capital, became the first permanent settlement in Ohio in 1788. Soon the area was settled by Scots-Irish from the states of Virginia, Kentucky, and Pennsylvania. Revolutionary War soldiers and other New Englanders also migrated into Marietta.

Other settlements followed. Cincinnati was settled by immigrants from New Jersey through the Symmes Purchase. Gallipolis was a French settlement established from 1790 to 1791. The Connecticut Western Reserve was formed as a stream of settlers from Connecticut arrived in 1796 amd 1797. Connecticut emigrants also joined with those from Vermont to establish Geauga County. Columbus was originally founded as a safe place for Canadians who sided with Americans during the Revolution. This Refugee Tract was formally established in 1796. That same year Maine joined the migrations and helped to establish Clermont County, while Scottish immigrants settled in Montgomery county.

By 1799,the population allowed establishment of the Ohio Territory, and its first census was taken in 1800. Pennsylvania sent Germans and Welsh, while others arrived from Virginia and Kentucky. In 1803, President Thomas Jefferson approved Ohio as the 17th State of the Union. Shakers settled Warren County just three years later. The British invaded the area once again during the War of 1812, but they were defeated by Commodore H. Perry on September 10, 1813 in the battle of Lake Erie. More Germans arrived between 1814 and 1824 to establish Tuscarawas and Brown Counties. 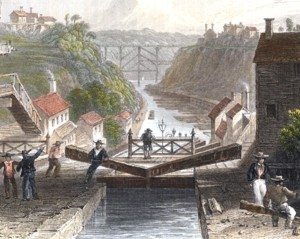 Advancements in infrastructure opened up more opportunity for migration. The Erie Canal opened a pathway from the Northeast in 1825, and railroad construction created jobs that attracted both English and Irish in the 1840s. In between these projects, the Mormans established their own settlements in 1831. By 1860, Ohio has home to the longest amount of railroad track in the country.

As a free state that bordered the South, Ohio played a key role in the operation of the Underground Railroad and birthed a strong abolitionist movement. After the Civil War, the political power of the state continued to grow. It’s nickname, “Mother of Modern Presidents,” reflects the high number of U.S. Presidents born within its borders. These include Ulysses S. Grant, Rutherford B. Hayes, James A. Garfield, Benjamin Harrison, William McKinley, William Howard Taft, and Warren G. Harding.

Ohio was named after the river that forms its borders in the South, Southeast, and some of the East: The Ohio River. Tradition says that Ohio means “great” or “beautiful river” in Iroquois and that French explorer Robert Cavalier was the first white man to view it. Ohio is heavily populated with buckeye trees, earning it a second nickname, “The Buckeye State.”

Ohio has been home to both agriculture and industry. Meat packing and barrel-making were two of it’s first industries, along with the mining of limestone, salt, and coal. In the 1880s, the American Federation of Labor was formed in Ohio. As urban areas grew, Southern and Eastern European immigrants arrived, as well as African Americans from the Southern U.s. At the turn of the 20th Century, capitalists of the Gilded Age, such as Rockefeller, Goodrich, and Kettering, grew and strengthened Ohio’s industrialization.

African American Research – To research ancestry of African Americans in Ohio, the best resource is “Fugitive Slave Cases in Ohio Prior to 1850.” This publication can be found in the Ohio State Archaeological and Historical Quarterly 69: 160-84. Many valuable records can be found at The Archives Library Division of Ohio Historical Society. These include: Selected Bibliography of Black History Sources at the Ohio Historical Society; the state auditor’s “Special Enumeration of Blacks Immigrating to Ohio, 1861–1863,”; State Archives Series 2261; the state’s first African-American newspaper, the Palladium of Liberty; You can also visit the Afro-American Museum in Wilberforce, Ohio.

Native American Research – Before the Europeans entered Ohio, it is believed that twelve to fifteen thousand native Americans lived in the area. This included several tribes separated by geographic region. The Miami were located in the West. The Northwest was home to the Wyandotte, the Ottawa, the Huron, and the Seneca. The Mingo lived in the east. The lower Scioto Valley held the Shawnee, and the Muskinghum Valley was home to the Delaware and the Tuscarora.

The Native Americans in Ohio were repeatedly caught up in the middle of European conflicts. First between the British and the French, where Natives fought on both sides of the war, and then between the British and the colonists in the American Revolution. Their situation only worsened after these conflicts ended, as the Americans now sought to fight them for their land. In 1794, after a twelve year struggle, Anthony Wayne defeated the natives at the battle of Fallen Timbers. A treaty was signed in 1795 that further stripped the natives of their land. By 1833, all Native Americans had left the area.

When researching other ethnic groups, the collection held by the Western Reserve Historical Society on ethnic immigrants is most complete. Two helpful sources are:

The websites below will provide state-specific details to those in search of information for Ohio genealogy work.