King William County, Virginia (Map It) was created in September 12, 1701 from King and Queen County . King William county was named for William III of England. 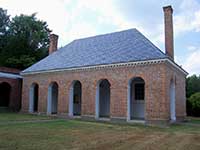 The King William County Courthouse is located in King William, Virginia. The King William County courthouse, erected early in the second quarter of the 18th century, is one of the older courthouses still in use in the United States. This T-shaped building was constructed of brick laid in Flemish bond, with an arcade imitating the first capital in Williamsburg. One of the best preserved of Virginia's colonial courthouse buildings, it features fine Georgian brickwork. About 1840 the courthouse was enlarged with a unique stile and a brick wall was erected to enclose the court green. Its rural historic setting is a rare survival.

The King William County record dates below are from the earliest date to present time. They may include records of land, estates, taxes, vital records, divorces, naturalizations, voter registration, military discharges and court records.

All county court records prior to 1885 (except for seventeen will books) were destroyed in a fire in that year.