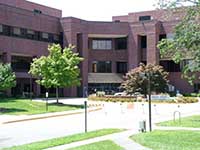 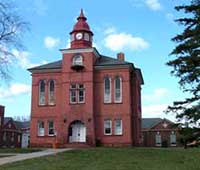 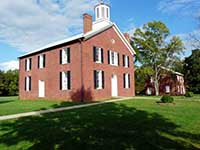 The Prince William County Courthouse is located in Manassas, Virginia. In 1732 the courthouse was at Brent Town (Brentsville). It moved to return some years later as the foruth courthouse, in 1820. The Brentsville courthouse is a two-story Federal styled building. It was built by William Claytor of Range County in the temple form. Foundation is locally quarried red sandstone. During the Civil War Yankee soldiers borrowed the bricks. A soldier wrote, "With the Court-house, they commenced at the top to get bricks, beginning with the chimneys and working down, while with the cler's office, they commenced at the bottom and worked up." The city of Manassas originated in 1852 at the junction of Manassas Gap and Orange and Alexandria railroads. During the Civil War this strategic junction’s lead to two important battles. After the wars the community grew, citizens sought to move the county seat there from Brentsville. In 1872 and in 1888 referrunda failed. A third referrundum in 1892 succeeded. This Romanesque Revival courthouse, designed by Thomas C. Teague and Philip T. Barye from Norfolk and Newport News was completed 1893 and served the county until 1984 when a new courthouse was built nearby.

The Prince William County record dates below are from the earliest date to present time. They may include records of land, estates, taxes, vital records, divorces, naturalizations, voter registration, military discharges and court records.

Many county court records have been lost, destroyed, or stolen at various times. Scattered years of deeds, wills, and orders, as well as various bond books and a plat book, survive.