Loudoun County, Virginia (Map It) was created in May 17, 1757 from Fairfax County . Loudoun county was named for John Campbell, 4th Earl of Loudoun, British Commander-in-Chief, North America during the Seven Years War . 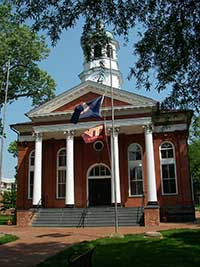 The Loudoun County Courthouse is located in Leesburg, Virginia. The Loudoun County Courthouse, first occupied in 1895, is the third on this site, which was designated for that use on the 1759 plat of Leesburg. On 12 Aug. 1776, the Declaration of Independence was read from the doorway of the first courthouse. The second was built of brick in the Federal style about 1811. The Marquis de Lafayette, onhis grand tour of the United States, was entereatined here on 9 Aug. 1825. President John Quincy Adams and former president James Monroe, who then lived near Leesburg, escorted him. In 1894, the Norris brothers, of Leesburg, built this courthouse, designed by William C. West, of Richmond, in the Classical style.

The Loudoun County record dates below are from the earliest date to present time. They may include records of land, estates, taxes, vital records, divorces, naturalizations, voter registration, military discharges and court records.