Buchanan County, Virginia (Map It) was created in February 16, 1858 and was formed from Russell County and Tazewell County . Buchanan county was named for James Buchanan, fifteenth U.S. President. 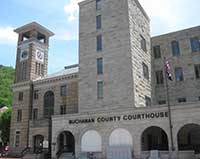 The Buchanan County Courthouse is located in Grundy, Virginia.

The Buchanan County record dates below are from the earliest date to present time. They may include records of land, estates, taxes, vital records, divorces, naturalizations, voter registration, military discharges and court records.

County court records were destroyed by fire in 1885; records created after that date suffered extreme damage in a flood in 1977. A few re-recorded deeds exist.