Gloucester County, Virginia (Map It) was created in 1651 from York County . Gloucester county was named for the Gloucestershire, England. 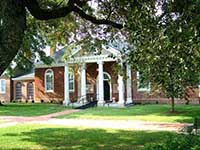 The Gloucester County Courthouse is located in Gloucester, Virginia. The old Gloucester county courthouse is not being at this time. The last time I was here it was used for council meetings and public meetings. The courthouse was re-erected in 1766 on the site of a building destroyed by fire. It was restored and remodeled and the clerk’s office building added in 1956.

The Gloucester County record dates below are from the earliest date to present time. They may include records of land, estates, taxes, vital records, divorces, naturalizations, voter registration, military discharges and court records.

All county court records were destroyed by an 1820 fire, and most of the records created after that date were destroyed in Richmond on 3 April 1865. Six minute books from the nineteenth century and two surveyor's record books survive.