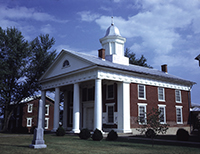 The Greene County record dates below are from the earliest date to present time. They may include records of land, estates, taxes, vital records, divorces, naturalizations, voter registration, military discharges and court records.

Lost the first deed book during the Civil War when it was removed from the courthouse; no records were lost, but some suffered extreme water damage in efforts to put out a fire in the 1970s.