Orange County, Virginia (Map It) was created in September 20, 1734 from Spotsylvania County. Orange county was named for William III of England.

Orange County Cities and Towns include Gordonsville and Orange . 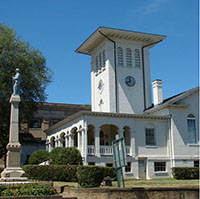 The Orange County Courthouse is located in Orange, Virginia. became the county's judicial seat in the early 1750's, in 1872, it was incorporated as a town, in 1908 fire destroyed much of the town, many buildings from the 1800's still remain.

The Orange County record dates below are from the earliest date to present time. They may include records of land, estates, taxes, vital records, divorces, naturalizations, voter registration, military discharges and court records. The present courthouse was constructed in 1858.