Vermont Birth, Marriage, Divorce as well as Death records, also known as vital records, provide you with information about important occasions in your ancestors life. Vital records, generally held by a civic office, can give you a much more comprehensive picture of your respective ancestor, assist you to differentiate concerning two people utilizing the exact same name, and enable you to locate links to a new generation. They could comprise of information like the event date and place, parents’ names, occupation and residence. The cause of death is also provided in many Vermont death records.

Vermont vital records really are a cornerstone of Vermont ancestors and family history research simply because they were typically recorded at or near the time of the event, helping to make the document more likely to be reliable. This page contains links, information that will help you request copies from Vermont state and county vital records keepers. Vital records (births, deaths, marriages, and divorces) mark the milestones of our lives and are the basis of genealogy research.

Ordering Vermont Birth, Marriage, Divorce and Death Certificates: The State Department of Health Office has records most recent 5 years. The fee for all certified copy are $10. For all records over 5 years old see the Vermont State Archives below. Records also can be obtained from the Town or City Clerk in town/city where birth or death occurred.

How to Order Vermont Vital Records 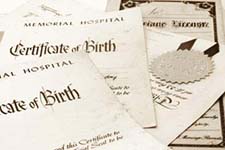 In early times in new England it was traditional for each town to record its own major events and vital records. Early Vermont settlers were no exception to that rule. Each town kept its own documents and it wasn’t mandatory to record vital records until 1857. That’s why many deaths and marriages before that time in Vermont were not well-documented.

Anyone who is looking for Vermont vital records can go to the Public Records Division and search on their own or send an inquiry. Any inquiries sent by mail will be taken care of for a $7 fee per event inquiry. Inquiry responses includes reference information for where the original record was found and a certified copy of the index card microfilm, if one was located.

The index contains separate cards for cemetery and death records, birth records, and marriage records for both grooms and brides. However, only the 1760-1870 group contains cemetery record cards.

The card index list each family by surname in alphabetical order. However, since some surname spellings varied, it’s important to check all variations carefully. Also, keep in mind that births after 1857 are listed under each surname in reverse chronological order and some children were not yet named when their births were recorded.

Each town clerk’s office may contain original vital records for families in that town. The state will issue an official record in the form of a microfilmed index card copy, but the original records may hold more information. Therefore, researchers should use the official reference card to locate and examine the original document whenever possible. Luckily, the official index card copy should list where the event is recorded in the town’s files. The Public Records Division has many original records on microfilm in their original form. The FHL also has several records for Vermont towns that pre-date 1850.

Birth Records – All birth certificates must be filed with each town clerk 10 days or less after the birth. They are filed by the midwife, doctor, or whoever is attending the birth. For example, the medical records staff of each hospital usually completes the certificates of birth for that hospital. Once that certificate is filed in the town, the town sends a certified copy to the Vermont Health Department to be filed there as well.

Marriage Records and Divorce Records – The Health Department receives a copy of each marriage certificate from each town after it has been completed. In order to complete the certificate, a couple must first give the town clerk certain information. Then they must have the person who officiates at their wedding date and sign it before they return it to the town clerk’s office.

Whenever a lawyer initiates a certificate that dissolves a civil union or marriage in Vermont, it is filed with the court. That also goes for divorce filings. When the divorce or dissolution is finalized, the court clerk signs the paperwork and then sends the record to be filed with the Health Department. Typically, it takes about three months for that finalization process to take place after the initial hearing is conducted in the court.

Death Records – Death certificates in Vermont are officially supposed to be filed by physicians. However, the funeral director is often given that task, instead. The family members of the deceased typically provide the majority of the information for the death certificate. The cause of death, however, must be listed and certified by a physician. Then the funeral director takes the certificate and sends it to the offices of the town clerk. From there, a copy is sent to the Health Department for its official records.