Los Angeles County, California (Map It) was created on February 18, 1850 as one of the original 27 counties . Los Angeles County was named for the words los angeles literally mean “the angels” and are a contraction of the original name Pueblo del Rio de Nuestra Senora la Reina de Los Angeles de Porciuncula (the Town of the River of Our Lady, Queen of the Angeles). In 1781, Governor Felipe de Neve issued orders for the establishment of the pueblo on El Rio Nuestra Senora de Los Angeles. The pueblo in time became known as the Ciudad de Los Angeles (City of the Angels), and it is from this contraction that the present name is derived

Since its creation Los Angeles County boundries have changed to include these: 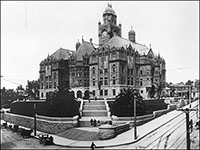 Courthouse History - Los Angeles' first building to be built as a courthouse was considered at the time to be one of the West's finest examples of Romanesque architecture. The "Red Sandstone Courthouse" was built at Spring and Temple Streets on what was then known as Poundcake Hill. An outside elevator with windows that was later added to the building became a sightseeing attraction of the city. Damage sustained in the 1933 earthquake made the building unsafe, and it was demolished in 1936. The site is now occupied by the current courthouse.

The following dates indicates what vital, land, probate, and court records are in Los Angeles county. The date listed for each record is usually the earliest registration filed. The date does not indicate that there are alot records for that year and does not mean that all such events were actually filed with the clerk. Some counties encompass land settled in the eighteenth century; their records pre-date county formation. Land transactions and vital records recorded in the county are at the county recorder's office. The county clerk general has probate books and files from the county's superior court, civil court records, and naturalizations. Divorces may be in either place, depending on how filed.