Lauderdale County, Alabama (Map It) was created on February 6, 1818 from the Cherokee and Chickasaw Cession of 1816. Lauderdale county was named in honor of James Lauderdale (1780–1814), Colonel in War of 1812. In the early 1800's, Lauderdale, who moved to West Tennessee, became a major in General John Coffee's cavalry of volunteers. Later promoted to Lieutenant Colonel, he commanded a brigade of mounted riflemen, serving under Andrew Jackson in many battles against the Indians. According to reliable historians, Col. Lauderdale did not die in the Battle of New Orleans, but was wounded in the Battle of Talladega and dies on December 23, 1814, seventeen days before Jackson's crushing defeat of the British at New Orleans. Several towns and counties in the southern states were named in his honor, though it is said that he never set foot in Lauderdale County.

A Map of Lauderdale County, Alabama contains detailed information about roads and boundaries, these maps may include rural communities, churches, and cemeteries. There is a collection of old Alabama maps at MapGeeks.org 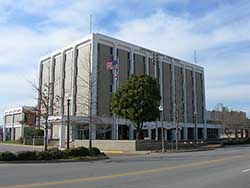 The Lauderdale County Courthouse is located in Florence, Alabama.

The following dates indicates what vital, land, probate, and court records are in Lauderdale county. The date listed for each record is usually the earliest registration filed. The date does not indicate that there are alot records for that year and does not mean that all such events were actually filed with the clerk.