Washington County, Missouri (Map It) was created on August 21, 1813 from Ste. Genevieve County. The county was named in honor of George Washington (1732–1799), commander of the Continental Army in the American Revolutionary War and first President of the United States.

A Map of Washington County, Missouri contains detailed information about roads and boundaries, these maps may include rural communities, churches, and cemeteries. 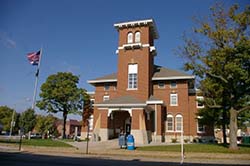 The Washington County Courthouse is located in Potosi, Missouri. In 1906 the Courthouse burned, but before the building was completely destroyed the officials were able to carry the records out safely. The Clerk's Office DOES NOT DO RESEARCH. Most staff will assist people in finding the materials, but it is up to the individual to do the research.