Montgomery County, Missouri (Map It) was created on December 14, 1818 from St. Charles County. The county was named in honor of Richard Montgomery (1738–1775), an Irish-born soldier who first served in the British Army and later became a brigadier-general in the Continental Army during the Revolutionary War.

A Map of Montgomery County, Missouri contains detailed information about roads and boundaries, these maps may include rural communities, churches, and cemeteries. 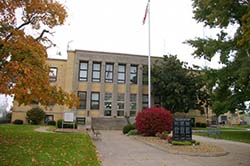 The Montgomery County Courthouse is located in Montgomery City, Missouri. The Clerk's Office DOES NOT DO RESEARCH. Most staff will assist people in finding the materials, but it is up to the individual to do the research.

The following dates indicates what vital, land, probate, and court records are in Montgomery county. The date listed for each record is usually the earliest registration filed. The date does not indicate that there are alot records for that year and does not mean that all such events were actually filed with the clerk.Damaged by fire in the Civil War, the Courtgouse was later razed; The Courthouse burned April 12, 1901, destroying many county records. Copies of early original deds are in Jones Abstract Company in Montgomery City.