Knox County, Indiana (Map It) was created on June 20, 1790 as an Original County. (Knox County, NW Territory, was formed from non-county area in 1790. This included segments of present Illinois, Michigan, Ohio, Wisconsin, plus all of Indiana. Knox County became an Indiana territory in 1800, although much of the original county had been formed into other counties by that time. It became an Indiana county in 1816). This county was named for U.S. Secretary of War Henry Knox. 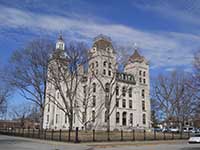