Henry County, Indiana (Map It) was created on June 1, 1822 from Delaware New Purchase. This county was named for Patrick Henry, attorney, orator, and founding father . 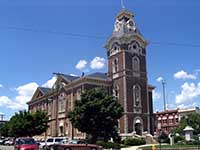