Burke County, Georgia (Map It) was created on February 5, 1777 as one of seven original parishes. Originally organized as St George Parish. Burke County lost land to Screven County (1793), Jefferson County (1796), and Jenkins County (1905), added area to Richmond County (1841).. Burke County was named in honor of Edmund Burke (1729 - 97), British political philosopher and Member of Parliament who was sympathetic to the cause of US independence.

A Map of Burke County, Georgia contains detailed information about roads and boundaries, these maps may include rural communities, churches, and cemeteries. 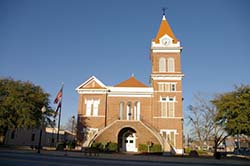 The Burke County Courthouse is located in Waynesboro, Georgia.

The following dates indicates what vital, land, probate, and court records are in Burke county. The date listed for each record is usually the earliest registration filed. The date does not indicate that there are alot records for that year and does not mean that all such events were actually filed with the clerk.