American military heritage in Georgia started with the establishment of the colonial militia early in the 17th century primarily to battle to prevent attacks from native inhabitants. The benefits and significance of Georgia military records in family history research for ancestors that were veterans are obvious but Georgia military records can also be important to researchers whose immediate ancestors just weren’t soldiers in any war. Due to the quantity of genealogical information included in a number of Georgia military pension data files they should never be overlooked during the research process.

The purpose of founding Georgia was to block the French and Spanish from the lands beyond North and South Carolina. Residents were often called to serve in the military for that purpose, but most of the records from that time period no longer exist, and those that do may not contain much useful genealogical information. 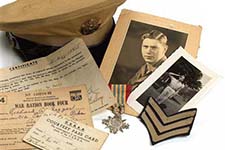 Less than 20,000 people lived in Georgia when the Revolutionary War began, in 1776. About 3,500 of them were men who were eligible to fight during the war.

Several soldiers who came from Georgia actually went into service for Virginia, North Carolina, or South Carolina. Some fought for the king, while others tried to stay neutral. Some of those records no longer exist, so there is no comprehensive guide to Georgia veterans from that war.

Georgia citizens who served in other states during the war or served in Georgia were granted bounty-land warrants. In 1781 and 1782, civilians were also issued bounty-land warrants. When the war ended Continental Line soldiers and others applied to get their warrants approved. They were given certificates, which had to be exchanged for their warrants. The Georgia Archives holds those records.

War of 1812 service records contain a lot of useful information. Records can be found at the National Archives and they list around one-fifth of military-aged makes in Georgia at the time of the war.

Confederate veteran pension records are held at the Georgia Archives, but copies can also be found at the FHL. Researchers should note that some Georgia residents served on the Union side. Many of them did so in units out of Tennessee.

Many Civil War records are held at the Georgia Archives, including salt lists, veterans censuses, and militia rolls. The Georgia Archives also holds a very useful “Alphabetical Index to Georgia Confederate Records.” It has been microfilmed. Some military records for Georgia after the Civil War are in the Georgia Department of Archives and History as original records or as microfilm copies.

Both microfilmed and original records from some later military actions can be found at the Georgia Archives as well. That includes rosters from the Philippine Insurrection, Poncho Villa Campaign, Spanish American War, and others.