Plumas County, California (Map It) was created on March 18, 1854 from Butte County . Plumas County was named for the Spanish originally called one of the tributaries of the Sacramento River El Rio de las Plumas or the “River of Feathers.” In creating this county, the state Legislature gave it the name Plumas because all of the numerous branches of the Feather River have their origins in its mountains.

Since its creation Plumas County boundries have changed to include these: 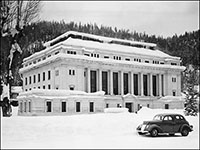 The Plumas County Courthouse is located in Quincy, California. Land was added from Sierra County in 1866. Learn More About State of California Court, Tax, Land and Probate Records.

Courthouse History - The size and cost of this classically inspired courthouse, which replaced a more modest New England-style building, was considered so exorbitant for the county that there was talk of recalling the board of supervisors. Over the years, several escape attempts were made from the jail, which was once located on the fourth floor of the building. One inmate broke his leg when the sheets he had tied together came apart as he lowered himself to the ground. The building remains in official use and is preserved in its near-original state. With an interior paved in Tuolumne marble and accented with pink Tennessee marble, the public spaces are favorite places for weddings and other social functions.

The following dates indicates what vital, land, probate, and court records are in Plumas county. The date listed for each record is usually the earliest registration filed. The date does not indicate that there are alot records for that year and does not mean that all such events were actually filed with the clerk. Some counties encompass land settled in the eighteenth century; their records pre-date county formation. Land transactions and vital records recorded in the county are at the county recorder's office. The county clerk general has probate books and files from the county's superior court, civil court records, and naturalizations. Divorces may be in either place, depending on how filed.