Tehama County, California (Map It) was created on April 9, 1856 from Colusa County, Shasta County and Butte County . Tehama County was named for the City of Tehama. Suggested possible roots are the Arabic word tehama (“hot low-lands”), the Mexican word tejamanil (shingle), or “high water” in the dialect of local Indians

Since its creation Tehama County boundries have changed to include these: 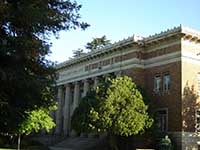 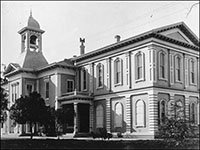 Courthouse History - Tehama's first courthouse in Red Bluff was a popular meeting place for unions, political parties, baseball teams, and other community groups. On Sundays it was also a popular place of worship after the sheriff struck a compromise and allowed use of the court by Baptists in the morning, Presbyterians in the afternoon, and Methodists in the evening. The tower was added to the building in 1880, one of many improvements to the building and the grounds. The building was demolished in 1920 to make room for a new facility.

The following dates indicates what vital, land, probate, and court records are in Tehama county. The date listed for each record is usually the earliest registration filed. The date does not indicate that there are alot records for that year and does not mean that all such events were actually filed with the clerk. Some counties encompass land settled in the eighteenth century; their records pre-date county formation. Land transactions and vital records recorded in the county are at the county recorder's office. The county clerk general has probate books and files from the county's superior court, civil court records, and naturalizations. Divorces may be in either place, depending on how filed.