Alpine County, California (Map It) was created on March 16, 1864 from Amador County, El Dorado County, Calaveras County, Mono County and Tuolumne County . Alpine County was named for the English word alpine meaning “of, pertaining to, or connected with, the Alps.” Its geographical position, lying as it does on the crest of the Sierra Nevada mountains, makes it particularly an alpine county, and hence its name

Since its creation Alpine County boundries have changed to include these: 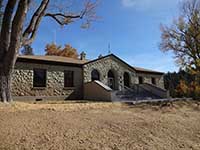 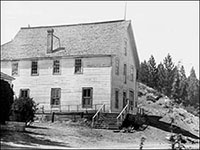 Courthouse History - Alpine County Courthouse Originally part of the Territory of Utah and then the Territory of Nevada, Alpine was recognized as part of California following an 1863 survey of state boundaries. Alpine's first county seat, Silver Mountain City, was abandoned in 1873 after the demonetization of silver, and the county government moved to Markleeville. This building, originally the Odd Fellows Hall, was used as the courthouse until 1928, when the courts moved to a more modern facility.

The following dates indicates what vital, land, probate, and court records are in Alpine county. The date listed for each record is usually the earliest registration filed. The date does not indicate that there are alot records for that year and does not mean that all such events were actually filed with the clerk. Some counties encompass land settled in the eighteenth century; their records pre-date county formation. Land transactions and vital records recorded in the county are at the county recorder's office. The county clerk general has probate books and files from the county's superior court, civil court records, and naturalizations. Divorces may be in either place, depending on how filed.