Montgomery County, Alabama (Map It) was created on December 6, 1816 from Monroe County. Montgomery county was named in honor of Major Lemuel P. Montgomery (Tennessee) who was killed in the Battle of Horseshoe Bend, 1814.

The act that created Montgomery County provided that its courts were to meet initially at Fort Jackson, located at the confluence of the Coosa and Tallapoosa Rivers and site of the surrender of the Creek Indians to Gen. Andrew Jackson, in present-day Elmore County. Andrew Dexter.

The courts met there only until June 1818, after which they met in nearby Alabama Town, founded by Gen. John Scott, who with several other migrants from Georgia founded the town on the bluff of the Alabama River.

The men abandoned it when a group from New England, led by Andrew Dexter, founded a nearby town in what is now the downtown area of Montgomery and named it New Philadelphia.

Scott and his companions then built a new town they called East Alabama. Seeing themselves as rivals, the citizens of East Alabama contemptuously referred to New Philadelphia as Yankee Town.

The bitter rivalry ended, however, when the towns merged on December 3, 1819, and incorporated as the city of Montgomery, just prior to Alabama being admitted as a state.

A Map of Montgomery County, Alabama contains detailed information about roads and boundaries, these maps may include rural communities, churches, and cemeteries. There is a collection of old Alabama maps at MapGeeks.org 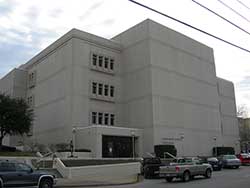 The Montgomery County Courthouse is located in Montgomery, Alabama , which was also selected as the state capitol in 1846, is often referred to as the Cradle of the Confederacy because the city briefly served as the first capital of the Confederate States of America in 1861.

The following dates indicates what vital, land, probate, and court records are in Montgomery county. The date listed for each record is usually the earliest registration filed. The date does not indicate that there are alot records for that year and does not mean that all such events were actually filed with the clerk.