Pike County, Alabama (Map It) was created on December 17, 1821 from Henry County and Montgomery County. The county boundaries changed several times before being set at their current locations in 1866. AAAAA county was named in honor of Zebulon Pike (1779–1813) of New Jersey, explorer and officer in War of 1812.

A Map of Pike County, Alabama contains detailed information about roads and boundaries, these maps may include rural communities, churches, and cemeteries. There is a collection of old Alabama maps at MapGeeks.org 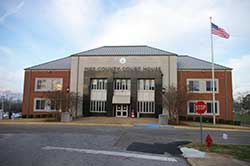 The Pike County Courthouse is located in Troy, Alabama. The county Seat was established at Louisville, later moved to Monticello and finally located in Troy in 1839. Troy became the county seat of Pike County in 1837, when citizens voted to move it from Monticello, in the eastern part of the county. The current courthouse was built in 1880. The Courthouse destroyed by fire in 1830, and all records were destroyed .

The following dates indicates what vital, land, probate, and court records are in Pike county. The date listed for each record is usually the earliest registration filed. The date does not indicate that there are alot records for that year and does not mean that all such events were actually filed with the clerk.