Autauga County, Alabama (Map It) was created on November 21, 1818 from Montgomery County; by Act of December 13, 1820 the boundaries in the north and northwest were enlarged; on January 12 1827 the line between Autauga County and Shelby County was more definitely fixed. In 1866 part of its territory was taken to establish Elmore County. In 1868 another portion of the county was taken to establish Baker County, later known as Chilton County. Autauga County was named from the Indian village Atagi.

A Map of Autauga County, Alabama contains detailed information about roads and boundaries, these maps may include rural communities, churches, and cemeteries. There is a collection of old Alabama maps at MapGeeks.org 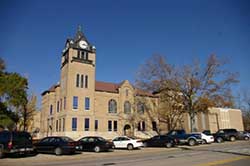 The following dates indicates what vital, land, probate, and court records are in Autauga county. The date listed for each record is usually the earliest registration filed. The date does not indicate that there are alot records for that year and does not mean that all such events were actually filed with the clerk.

Autauga County vital records can be found at the Alabama Department of Public Health which has Birth And Death Records from 1908, Marriages from 1936 and Divorce Records from 1950. Please refer to the information to the Statewide Vital Records in Alabama for current fees and application process.