Laclede County, Missouri (Map It) was created on February 24, 1849 from Camden County, Pulaski County and Wright County. The county was named in honor of Pierre Laclede (1729-1778), founder of St. Louis, Missouri.

A Map of Laclede County, Missouri contains detailed information about roads and boundaries, these maps may include rural communities, churches, and cemeteries. 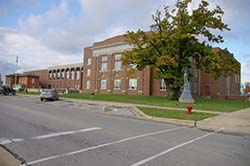 The Laclede County Courthouse is located in Lebanon, Missouri. The Clerk's Office DOES NOT DO RESEARCH. Most staff will assist people in finding the materials, but it is up to the individual to do the research.

The following dates indicates what vital, land, probate, and court records are in Laclede county. The date listed for each record is usually the earliest registration filed. The date does not indicate that there are alot records for that year and does not mean that all such events were actually filed with the clerk.

Laclede County Courthouse was destroyed by fire of unkown causes in 1920. County recorder and County treasurer were able to get to their office and take out all their records. Some records were kept in a vault which collapsed and Circuit Clerk A.H. Gray lost all the records in his possession. Sheriff Lambeth also had some records in this vault G.C. Jones superintendent of schools, lost everything in his office. Article