Knox County, Missouri (Map It) was created on February 14, 1845 from Scotland County. The county was named in honor of Henry Knox (1750-1806) an American bookseller from Boston who became the chief artillery officer of the Continental Army and later the nation's first Secretary of War.

A Map of Knox County, Missouri contains detailed information about roads and boundaries, these maps may include rural communities, churches, and cemeteries. 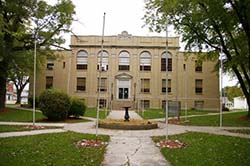 The Knox County Courthouse is located in Edina, Missouri. The Clerk's Office DOES NOT DO RESEARCH. Most staff will assist people in finding the materials, but it is up to the individual to do the research.

Fire destroyed the courthouse on Christmas Eve 1885. No records were destroyed