Mississippi County, Missouri (Map It) was created on February 14, 1845 from Scott County. The county was named for the Mississippi River, the second-longest river in the United States which forms Missouri's eastern border .

A Map of Mississippi County, Missouri contains detailed information about roads and boundaries, these maps may include rural communities, churches, and cemeteries. 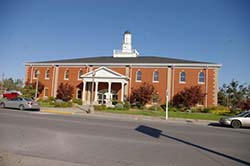 The Mississippi County Courthouse is located in Charleston, Missouri. The Clerk's Office DOES NOT DO RESEARCH. Most staff will assist people in finding the materials, but it is up to the individual to do the research.

The following dates indicates what vital, land, probate, and court records are in Mississippi county. The date listed for each record is usually the earliest registration filed. The date does not indicate that there are alot records for that year and does not mean that all such events were actually filed with the clerk.Courthouse reportedly burned in 1891, Record loss unknown. The Courthouse burned, Monday, Feb. 10, 1997. Extensive damage done to records. Joan T. Feezor of CA emailed me and stated "I just wanted to update the information on the MIssissippi County MO courthouse fire. While the courthouse was gutted and later demolished, 98% of county records were saved. The Office of Secretary of State, Local Records Program, spent over nine weeks pulling records from the courthouse site. The records were dried using a variety of techniques. Since I was an archivist with the Local Records Program and lived one mile from the courthouse, I was the supervising archivist who oversaw the project. Please inform genealogists and other researchers that the records still exist."